Kuo-sung Liu is probably the best-known Chinese painter in the Occident. Born in China, he escaped with his parents when a child to Taiwan, where he was reared and educated. His art education included a trip to Europe. Liu returned to Taiwan with a new aesthetic: the vital abstract concepts of western painting must be incorporated into Chinese art, but without losing the equally valuable Oriental character. It was decided by Liu, and a group of fellow artists sympathetic to the idea, that the best way to retain a valid Chinese character was to remain with traditional Chinese paint media – all water soluble. The name for the movement: ‘The Fifth Moon Group.’

Word of these artists spread to Japan and the Philippines, where they were shown; and then to the U.S. Soon 4 or 5 of them were being exhibited in New York. Liu’s work of the 60s was mostly landscape oriented, with amorphous shapes in muted colored inks. From Taiwan Liu watched the astronauts landing on the moon, and the impact of the large earth/moon shapes in the black void of the TV screen led him to a new series. The stylistic change now involved a separation of the vertical scroll painting area into sections, one always containing a large moon or sun; the other areas were bands of color, and entirely new compositional treatment. A major work of this period comprising 5 panels was acquired by the Art Institute of Chicago.

James Cahill (Professor Art History, University of California at Berkeley): Although some passages in the recent paintings are still produced by semi-controlled semi-accidents, the power of an ordering mind can, on the whole, be felt more forcibly than before. As with the early Chinese masters, an increase in formal order is accompanied by a decrease in the brilliance and range of color, which is now generally subdued, controlled, but still very effective… This combination of ‘controlled disorder’ in the pictorial surfaces and strong overall structure gives to Liu’s new images a deeply analogic relationship to natural imagery that is felt immediately by anyone seeing these recent paintings. They will draw from the depths of one’s memory half-forgotten visual experiences that will coalesce with a new vision of a pure, profound world of dynamic but somehow tranquil forms. (from Liu exhibition catalog, Monterey Peninsula Museum of Art, California)

Two years ago the artist moved to Hong Kong to accept the post of Chairman of the Fine Arts Department of the Chinese University of Hong Kong. In the past year major Liu exhibitions have been held in the United States and Munich. 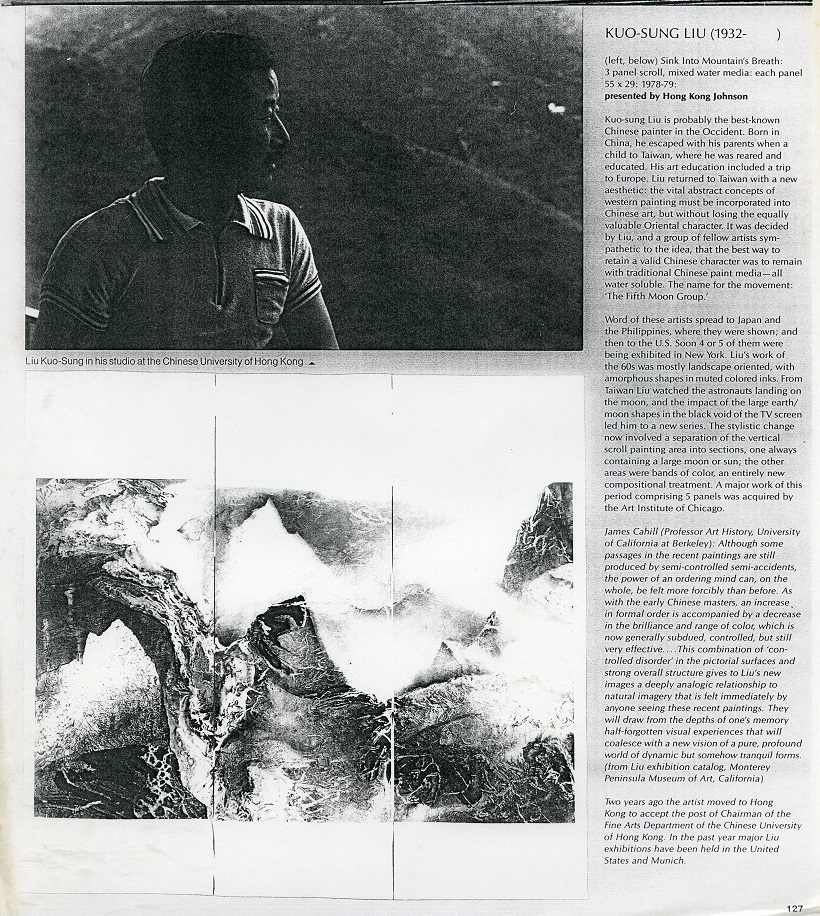