If there is one thing that marks this or that painter or sculptor as having attained stature, it is his or her ability to make the viewer say at once: “That’s by So-and So.”

To do more than that, itself an achievement, the artist has to contribute something else – a particular and valid vision of the world seen through his own vision, his own soul or spirit, or eyes-plus-brain – whatever you like to designate it.

In the Front Art Group exhibition at the Arts Centre, rather few have managed to reach the first stage of making images recognizably theirs. And only two have gone far beyond that to produce works that replicate in colour and form a special vision that is wide enough to embrace large segments of experience.

One of them is of course Liu Kuo-sung who, in the one painting shown in the exhibition, gives what is currently, and has been for some time, his view of life represented by a landscape. He is technically by far the most important and accomplished of the artists shown.

It requires one hanging scroll of medium size to demonstrate all these points at one glance.

I have the feeling that he is working his way toward another stance in his painting (though this is not evident from the present work which dates from 1978) and it will be interesting to see what happens in another year or so.

The other star of the show is unquestionably Li Yuen-chow whose work I have not consciously seen before.

He is a watercolourist of considerable achievement and I know now that next time I see one of his works I’ll immediately know whose it is.

The works he shows are moody, brooding landscapes mostly using the cool end of the palette – so that in one, with boats by the shore – it is a delicious surprise to discover pink as delicately blue as pink can be.

While Liu Kuo-sung is an example of that revolution which has made certain Chinese artists synthesize Chinese tradition with Western contemporary approaches, Li Yuen-chow is hardly distinguishable from a good contemporary English watercolourist.

He is certainly as good as many of them and shows promise of future great things.

His painting is calm, faintly melancholy, purged of the upheaval of today’s world, steeped in the everlasting qualities of the wintry lake with bare twigs of willow and a boat or two in the cold. He has understood something visually and emotionally important about aspects of natural scenery which take the mind to a quiet palce – and leave the feelings and the intellect satisfied.

That is quite an accomplishment for a youngish man.

It would have been helpful if the medium had been stated, at least on some works. I take it that Au Mansiu’s small vivid work is an embossed etching, but I wouldn’t be sure. His watercolours are curiously inept.

An artist who may emerge some time into a higer category is Liew Come-tong – his still-life of toys and objects children find and play with needs only the push of real artistic attack and comprehension to turn it from statement to painting (which is another dimension).

Kwok Hon-sham has two landscape scrolls one of which – the longer – is very good. He, too, verges on better things.

There are modish (and no more than that) acrylics (oils?) of Kwan Wai-cheong, lurid without much point to being lurid.

I liked the pieces of Cheng Ming’s calligraphy, but his painting is very weak, if straightforward. And there is a watercolourist called Lee Quan-pui who does much better than the famed Don King-man without having received the plaudits. Charming and slight.

King Chia-lun has three of his admirably executed cloud paintings in what always seems to me very sickly colours – the canvas generally divided into two unequal parts. One says: “That’s King Chia-lun.” But hardly more than that, I fear. 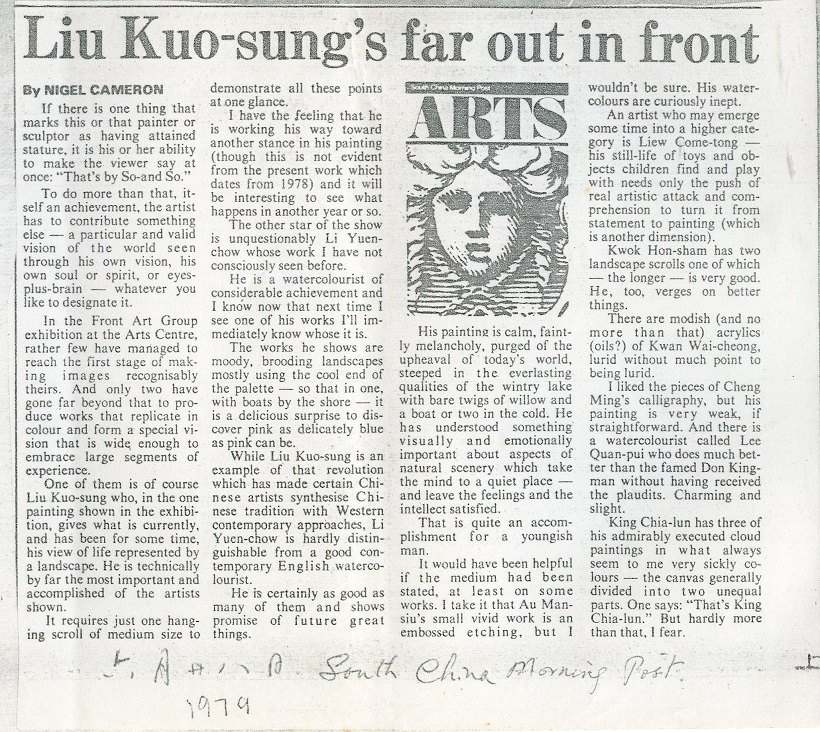